There is another way to demonstrate the  greenhouse gas effect using the SURFRAD data.  I have selected SURFRAD data for the year 2016 for the Sioux Falls, South Dakota and Desert Rock, Nevada sites

Some thoughts about the following charts 1B and 3B.  These charts plot  the radiation data—both solar short wave and the Earth’s longwave IR plus the net Solar and net longwave IR.

Charts 2B and 4B show air temperature, wind speed, relative humidity and albedo.  These data are not used in the analysis but might prove valuable to someone interested in deriving a better understanding of the energy balance.

Different from the earlier chart in Part 1 which showed a 24 hour continuous plot of data, the following 4 charts are the daily data in a given month combined and  the mean extracted for each data set.

END_OF_DOCUMENT_TOKEN_TO_BE_REPLACED

The following is a quote from Climate Change Reconsidered II** :

“ As carbon dioxide concentrations increase so too does the intensity of back radiation at the surface across the active wavebands of CO2, and because this radiation emanates from a lower and warmer layer of the atmosphere, the magnitude of the back radiation increases. Consequently, the net infrared radiation emanating from the surface is reduced, causing a rise in temperature that generates increased heat exchange and evaporation. This surface warming also contributes to an increase in convective instability”.

So, hold on and let me explain why I believe this.

First, a look at the big picture.   The Sun’s surface is somewhere about 5500 C.  Radiation goes out in all directions with some of it directed toward Earth.  This is Earth’s principal source of energy.  This radiation travels 93 million miles in about 8 minutes to reach Earth.  It loses much of its strength in the journey, but at the top of our atmosphere, its strength is nominally 1365 watts per square meter.  The Sun’s radiation mainly consists of photons of visible light, ultraviolet and infrared.  The full force of the Sun’s radiation seldom reaches the Earth surface because of clouds, reflection off snow and ice, scattering in the atmosphere for example and the angle that the Sun’s rays strike the surface.  Further complicating this topic is the fact on average, the Sun only shines on any place on Earth for more than 12 hours per day.

Many charts showing the Earth’s average energy budget use 340 w/m²  because when you factor in the length of the day and the spherical geometry of the Earth the effect is about ¼ the energy at the top of the atmosphere at noon.  While the Energy budget charts are useful, I believe they get in the way of understanding the GHG effect.  So, the following will uses actual measured radiation data and not the hypothetical 340w/m².

To get an idea of what happens at the surface, lets take a look at the data collected by the Surface Radiation Project. The Surface Radiation Budget Network (SURFRAD) was established in 1993 through the support of NOAA’s Office of Global Programs. The SURFRAD mission is clear:

“its primary objective is to support climate research with accurate, continuous, long-term measurements of the surface radiation budget over the United States”.

SURFRAD currently has 7 operating stations.  These stations are very well equipped. They can measure upwelling and downwelling solar, upwelling and downwelling IR, temperature, RH, wind speed, cloud cover, UVb  and several others.   The SURFRAD website allows you to make charts of the collected day.  For starters I have plotted some data from the Desert Rock, Nevada SURFRAD site.

END_OF_DOCUMENT_TOKEN_TO_BE_REPLACED

This posting sets out a preliminary understanding of the “carbon cycle” that you may not be aware of. The next posting will build off of this to lay out the science of climate change.

The Sun is the Earth’s source of energy. The energy is transported in the form of waves (radiant energy) known as electromagnetic energy. The Sun’s enormous surface temperatures generates these waves. The waves have a wide range of frequencies. In general, the waves are known familiarly as x rays, ultraviolet, sunlight, short wave infrared, radio waves, and microwaves. These waves heat the Earth.  Not all of the waves get through to the Earth’s surface.  Some are absorbed like Ultraviolet by ozone;  some are reflected back into space by clouds; and some are scattered by encountering mater in the atmosphere.

Much of the  Suns energy is reemitted from the Earth as longwave infrared. Some of the reemitted energy is delayed on its way back out into space by the so called greenhouse gases and water vapor. This slowdown is the reason the Earth has a habitable temperature. The primary greenhouse gas is carbon dioxide (CO2).  However, water vapor is the largest factor, by far, in the greenhouse effect.

END_OF_DOCUMENT_TOKEN_TO_BE_REPLACED

The warmers contend that no one studies the role the Sun plays in global warming any more. It is true that measurements of the Sun’s electromagnetic radiation received at the top of the Earth’s atmosphere, hardly changes. There are annual variations in the Sun’s energy received because the Earth’s orbit around the Sun is elliptical rather than circular. We are further away from the Sun in June than in January. However the distance effect averages out as it is essentially the same from year to year.

END_OF_DOCUMENT_TOKEN_TO_BE_REPLACED

There are several excellent sources for Skeptics. This posting provides a

source for Solar Research Papers.   The amount of Sun based research may surprise you, because the Warmers continue to tell us that the Sun is not important.

Some of the research is readily available and some is behind paywalls. But I suspect that just looking at the available research will occupy you for some long time.   The source is Club du Soleil  Click here to see  this source.

There are several additional resources that I will post soon.

There was an uptick in Sunspot numbers and F10.7cm radio flux.   Sunspots monthly average went up to 72  versus  55 in March.   Cycle 24’s  pattern seems somewhat reminiscent of Cycle 23 during its time at or near maximum. (Click on charts to enlarge.) 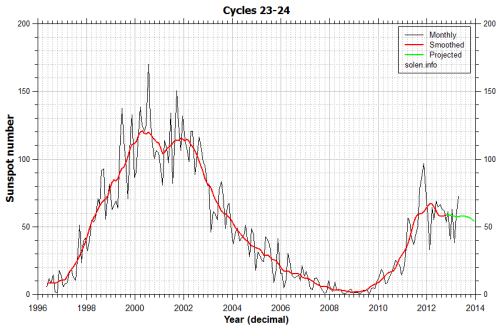 Chart curtsey of Solen.com
Sunspots appear to be in sync with the predicted path shown as the green line in the chart.
END_OF_DOCUMENT_TOKEN_TO_BE_REPLACED

Solar Cycle24 July sunspot and F 10.7cm radio flux numbers are up slightly from June.  Pretty much in line with the activity projection and much below that of Solar Cycle 23. (Click on Graphs for Clarity)

Large Filament on the Sun

The Sun currently has a filament that stretches more that 400,000km across the face. Filaments are formed in magnetic loops that hold relatively cool, dense gas suspended above the surface of the Sun. Because they are cooler than the photosphere they can look dark.

But when viewed in profile they look like a giant loop, called a prominence. 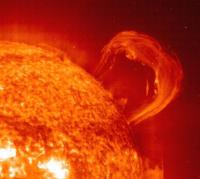 Occasionally when these filaments collapse,  a coronal mass ejection (CME) can occur.   Because the filament is looking directly at the Earth,  a CME could cause problems.   Lets hope this does not happen.