Fire Ice–Biggest Source Of Natural Gas On The Planet

The US Geological Survey (USGS) cited estimates of the methane (CH4) trapped in global methane hydrate (aka methane clathrate, Fire Ice, etc.) deposits are 3600 times more than the 2016 US consumption of natural gas. The 2016 US

consumption of natural gas (natural gas is mostly methane), according to Donn Dears, was 27.5×10^12 cubic feet.

The estimate of trapped gas in the deposits ranges from 10^17 to 5×10^18 cubic feet*.  Those are estimates and further those estimates probably include some amount of methane hydrate that will never be economical to produce. Even so, oil reserves that were supposed to have peaked many years ago, keep growing because of new technology. eg. Fracking.  So, who knows?

*(For the non-engineer or scientist that might not know how much that is, it can be restated as 1 followed by 17 zeros to 5 followed by 18 zeros cubic feet of natural gas.)

Where are the hydrate deposits found?

Methane hydrate deposits are found (or predicted) to be associated with continental margins and onshore permafrost areas. The chart below global areas where deposits are to be found. 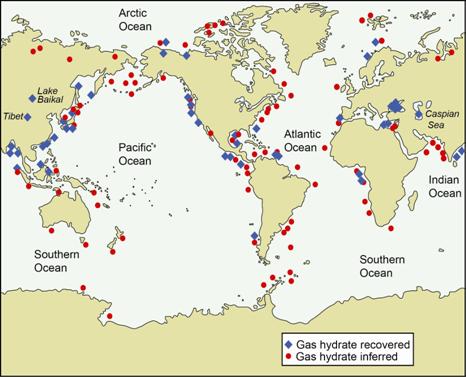 First, let’s discuss where the methane originates. Methane is largely produced by micro-organisms that act on the plankton that has accumulated deep in the ocean floor sediments.  In the upper layers of the sediment where the temperature and pressure are suitable, the rising CH4 bubbles are captured in very cold water and the hydrate is formed. While methane produced biogenically is considered the most widespread source, there is another source.  Thermogenic methane is produced where high pressures and high temperatures cook organic matter.

END_OF_DOCUMENT_TOKEN_TO_BE_REPLACED

A posting by sundance titled “Angela Merkel Reflects Fear And Loathing Amid EU Elites…”.  I believe provides an important perspective on the President Trump’s America First Strategy.  I have focused on Energy and the Paris

Agreement, but Trump’s strategy, as laid out by the author, sundance, is more that those two items.  It really is a plan to make the US economically strong again.

President Trump has put a jaw-dropping U.S. energy platform solidly into place.  You can learn more about them HERE and HERE.  The announcements last week are tectonic in consequence though seemingly lost amid the chafe of media reporting over twitter spats.

Everything President Trump’s team does is connected to a bigger, much bigger, picture than most people are paying attention to.  However, those who control the levers of multinational power are paying very close attention.

At it’s core and central elements ‘America-First’ is about prosperity and national security through the utilization of leveraged economic power.   For four decades, as he built out his empire of holdings, every-single-day at every-single-opportunity, Donald Trump voiced vociferous frustration that politicians were allowing the U.S. to be controlled, lessened, weakened and robbed by multinational economic interests.

END_OF_DOCUMENT_TOKEN_TO_BE_REPLACED

I do not think that the developed nations of the world are ready to endorse the actions they have signed onto when they authorized the Paris Agreement (PA).  They liked the applause they were receiving from the media and the environmentalists. But they have not responded in-kind to their commitments for reducing CO2 emissions or contributions to the fund that helps the underdeveloped nations. See here and here. Vox posting on 4 October 2016 said “No country on Earth is taking the 2ºC climate target seriously”.  The Climateactiontracker.org posted this quote: “Right now, with the policies governments have in place, we are heading to a warming of 3.6C said Prof Kornelis Blok of Ecofys.”The developed nations realize that it is time for them to “put up or shut up”. The “put up” part is bedeviled by the fact that most of them are finding that their renewable energy installations, eg solar and wind, are raising the cost of energy to a point where many can no longer afford it.  Further, they are learning that the renewables make their power systems unstable and thus vulnerable to loss of power to supply the customers and industries.

Maybe, just maybe they are becoming aware of the actions they need to undertake to keep the Global temperature rise at no more than the target of  1.5C.  The 24 March 2017 Science magazine published a study titled: “A roadmap for rapid decarbonization”.

END_OF_DOCUMENT_TOKEN_TO_BE_REPLACED

Dependance On Petroleum?—More Than Just Use As A Fuel

How much do you depend on petroleum-based products?   A few of the non-fuel uses are previewed in the following video:

Rebloging a posting from Oilpro.com titled “Mr. President, you owe America an apology. We did drill our way to $2 gas.”

The President has done about everything imaginable to make the price we pay for energy skyrocket. He has prevented drilling for oil on Federal lands but he

could not do anything about State and private land. It is disgraceful that the media lets him get away with his retrospective claims that the lower prices were his doing. He even claimed he had approved oil being pipelined from Canada.

Anyway, Marita Noon tells of the misinformation that the President feeds to low information crowd.

MY PRESIDENT YOU OWE AMERICAN AN APOLOGY. WE DID DRILL OUR WAY TO $2.00 GAS.

“We can’t just drill our way to lower gas prices,” President Obama told an audience four years ago at the University of Miami. Like this year, it was an election year and Obama was running for re-election. Later in his speech, he added: “anybody who tells you that we can drill our way out of this problem doesn’t know what they’re talking about, or just isn’t telling you the truth.” He scoffed at the Republicans for believing that drilling would result in $2 gasoline—remember this was when prices at the pump, in many places, spiked to more than $4 a gallon: “You can bet that since it is an election year, they’re already dusting off their three-point plans for $2 gas. I’ll save you the suspense: Step one is drill, step two is drill, step three is drill.”

Well, Mr. President, you owe America, and the Republicans, an apology. Your snarky comments were wrong. The Republican’s supposed three-point plan, which you mocked, was correct.

END_OF_DOCUMENT_TOKEN_TO_BE_REPLACED

Why Not Make North America, the New Middle East?

Several years ago, a study done by the Manhattan Institute titled “ Unleashing the North American Energy Colossus: Hydrocarbons Can Fuel Growth and Prosperity”, by Mark P Mills pointed out that we have the capability to replace the Middle East as the major source of crude oil.  This, he says, would be of

huge economic benefit to the US, Canada and Mexico. Something like $7 trillion dollars of value over the next 15 or 20 years.

Mills argues that the problems with becoming the New Middle East are political, not geological nor technological. One of the political roadblocks was resolved when the latest Federal budget bill was enacted. The bill included the removal of the prohibition against selling US crude oil on the world market. That prohibition had stood since the Nixon Administration.

While the Executive Summary that follows is probably enough for most readers,  Mill’s full report, some twenty pages in length, can be read by clicking here.

The recent growth in hydrocarbons production has already generated hundreds of thousands of jobs and billions in local tax receipts by unlocking billions of barrels of oil and natural gas in the hydrocarbon-dense shales of North Dakota, Ohio, Pennsylvania, Texas, and several other states, as well as the vast resources of Canada’s oil sands.

It is time to appreciate the staggering potential economic and geopolitical benefits that facilitating the development of these resources can bring to the United States. It is no overstatement to say that jobs related to extraction, transport, and trade of hydrocarbons can awaken the United States from its economic doldrums and produce revenue such that key national needs can be met—including renewal of infrastructure and investment in scientific research.

An affirmative policy to expand extraction and export capabilities for all hydrocarbons over the next two decades could yield as much as $7 trillion of value to the North American economy, with $5 trillion of that accruing to the United States, including generating $1–$2 trillion in tax receipts to federal and local governments. Such a policy would also create millions of jobs rippling throughout the economy. While it would require substantial capital investment, essentially all of that would come from the private sector.

The underlying paradigms embedded in American energy policy and regulatory structures are anchored in the idea of shortages and import dependence. A complete reversal in thinking is needed to orient North America around hydrocarbon abundance—and exports.

In collaboration with Canada and Mexico, the United States could—and should—forge a broad pro-development, pro-export policy to realize the benefits of our hydrocarbon resources. Such a policy could lead to North America becoming the largest supplier of fuel to the world by 2030. For the U.S., the single most effective policy change would be to emulate Canada’s solution for permitting major energy projects: create a one-portal, one-permit federal policy for all permits.

The recent preoccupation with technologies directed at creating alternatives to hydrocarbons misses how technology also unleashes alternative sources of hydrocarbons themselves. A number of detailed analyses of the new hydro- carbon realities have emerged, not least of which are excellent ones from Citi, Wood Mackenzie, IHS, and the U.S. Chamber of Commerce.

The authors of Citi’s detailed report “Energy 2020: North America, the New Middle East?” note that “[t]he main obstacles to developing a North American oil surplus are political rather than geological or technological.”

The projected growth in total world energy demand through 2030 is equal to an additional two Americas’ worth of consumption. Every credible forecast shows hydrocarbons fueling the major share of that growth, as they have in the past. While alternative energy has grown rapidly, the overall contribution to U.S. and world supply remains de minimus and stays that way in every credible future scenario.

There will doubtless be objections to the idea of a radical shift in policies and attitudes toward hydrocarbons. But the benefits to the U.S., to the rest of North America, and to the rest of the world are so dramatic and important that abandoning them without serious policy deliberations would be unconscionable.

New Oil And Gas Find In The Mediterranean.

A large field (named Zohr) containing up to 30 trillion cubic feet of natural gas has been discovered off the coast of Egypt. The Italian oil group Eni, owner of

this field, says it is almost 5000 feet below the water surface and covers an area of about 40 square miles. Eni proposes that it be piped into Egypt for use.

“Egypt consumed 1.7 trillion cubic feet of natural gas last year, according to BP’s most recent Statistical Review of World Energy. At the same rate of consumption, the Zohr discovery could supply the country for almost two decades.