Climate cycles are continuously happening on Earth since its beginning estimated to be some 4.5 billion years ago. Detailing the earliest climate cycles can only be done by painting with the broadest of brushes.  In more recent times, proxies, such as ice cores and oxygen isotope measurements are available for use in reconstructing these cycles. The globe has experienced glaciers in relatively recent times and in the not too distant future will surely experience glaciers again. The profound changes that take place resulting in glacial periods are of great interest.

END_OF_DOCUMENT_TOKEN_TO_BE_REPLACED

The lead from a posting by Chris Mooney is “Humans Have Already Set in Motion 69 Feet of Sea Level Rise”.  See Mother Jones, 30 January 2013.  Mooney uses information provided by Ohio State University glaciologist Jason Box that claims that Greenland’s glaciers are melting at an alarming rate. The chart from that posting is shown below: (click on charts to improve clarity)

Chart from Mother Jones
You can read the figures telling that during the period 2000 through 2012 the rate of melt was 131.5 km²/year. Box says this is due to the increase of both CO2 and CH4 accumulation in the atmosphere.  Looking at the slope of the chart, one’s initial reaction is WOW, this must be serious.
However, Willis Eschenbach responses to the Mooney posting with “Chris Mooney’s Chartsmanship in the Service of Alarmism” on the WUWT website.  Eschenbach first determines the amount of Greenland ice:
“As usual, there are various estimates. The Physics Hypertextbook is great for this kind of thing because it gives a variety of estimates from various authors. They range from a low end of 1.7 million square kilometres to a high of 2.2 million square km. I’ll take an average of 1.9 million square km.”
Then Eschenbach says:
“By the year 2100, if it continues losing ice at the rate Jason Box claims above, -131.5 km2 per year, the total ice area of Greenland will have gone from 1.90 million square km all the way down to … well, to two decimals of accuracy, by the year 2100 the ice will be down to 1.90 million square kilometres …”
He adds that:
Assuming all that were true, at the current rate of -131.5 km2 of ice loss per year, Greenland will be ice-free fairly soon, in only … well … 1,900,000 km2 ice area / 131.5 km2 per year annual loss ≈ 14,500 years from now … “
Eschenbach’s chart, below, shows how that would look on a real chart that is not trying give people the wrong impression: 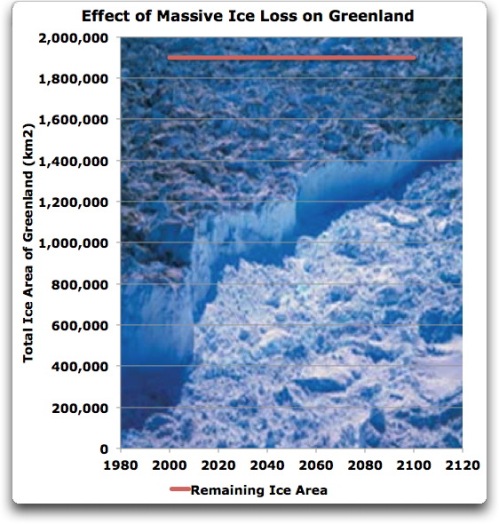 Chart from WUWT
I looked at it from a slightly different direction using the figures from Wikipedia.  Wiki says that the total volume of ice on Greenland is 683,751 miles³. Further they say that the melt rate in 2006 was 57  miles³/year and that the improved and reprocessed data between 2003 and 2008 was about 47  miles³/year.   Using the 57  miles³/year to be conservative would result in an ice free Greenland in 683,751 ÷ 57 = 11,996 years. Not the same as Eschenbach’s number but of no practical difference.  Do I think I know when Greenland’s ice sheet will melt if ever?  No, but neither do the “experts” that try to fool you into believing it will be in the near future.
Wiki also adds that if all of the Greenland ice were to melt it would raise the sea level 23.6 feet.   The 69 feet of Mooney’s posting requires both the Antarctic and Greenland ice sheets to completely melt.
So what do we make of this? If Mooney went so far as to calculate the amount of sea level rise due to total melting of the Antarctic he must have realized how long this would take at the current melt rates.  As an alarmist, he probably wants you to believe that the melt rate will escalate exponentially but I would guess he doesn’t have data to support that. So it is just more alarmist stuff that we have become (unfortunately) used to seeing.
I reviewed the Mother Jones article. I also looked at the comments.  At one point, a commenter reports Eschenbach’s posting.  Then the comments turned to bashing Eschenbach,  one calling him garbage.  Not once did anyone offer to refute Eschenbach numbers.  Eschenbach’s may not have a conferred degree in science or engineering but his mental abilities are noteworthy.  If you were going to the moon, and had only the choices of Eschenbach, or those leading alarmist lights Al Gore and/or Bill McKibben to do the math that would chart your way,  who would you pick?
cbdakota