This posting is a reblog of Dr Roy Spencer’s posting “Inevitable Disaster: Why Hurricanes Can’t Be Blamed On Global Warming“.   It is part a pitch for his new book that is a “putdown”  to those the would-be prophets of global doom.

In it I review the many fascinating examples of major hurricane landfalls in the United States, even going back to colonial times.

For example, two major hurricane strikes endured by the Massachusetts Bay Colony, in 1635 and in 1675, have yet to be rivaled in more modern times. Major hurricane Maria, now approaching a downward trend in both the number and intensity of landfalling major Florida hurricanes:Dominica and Guadeloupe, is probably no match for the Great Hurricane of 1780 in the Caribbean, which had estimated winds of 200 mph and killed 20,000 people.

I also address the reasons why Hurricane Harvey and its flooding cannot be blamed on climate change. Regarding Hurricane Irma which recently terrorized Florida, you might be surprised to learn that it is consistent with a downward trend in both the number and intensity of landfalling major Florida hurricanes: 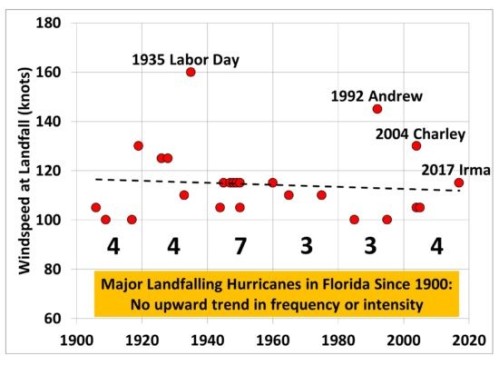 But what has changed is the number of people and amount of infrastructure at risk along the Altantic and Gulf of Mexico coastlines. Before 1900, there were virtually no people residing in Florida. Now its population exceeds 20 million. Miami was incorporated in 1896…with only 300 people. Even if there is no long term change in hurricane activity, hurricane damage will increase as coastal development increases.

I review the science of why major hurricanes in the tropical Atlantic, Caribbean, and Gulf of Mexcico are not limited by sea surface temperatures, which are warm enough every hurricane season to support catastrophic hurricanes.

Even the IPCC has low confidence in whether hurricanes will become more frequent or more severe in the coming decades. NOAA’s GFDL says we might see 2% to 11% increase in activity by the end of the century. Does that sound like what you should be worrying about during hurricane season if you live on the Florida coast? Maybe instead you should worry that you chose to live somewhere that will, inevitably, be hit by a hurricane sent by Mother Nature that will be catastrophic with or without the help of humanity’s greenhouse gas emissions.