ExxonMobil’s— “The Outlook For Energy-View to 2040″

The ExxonMobil Report contains a wealth of information. This posting will look at the status of renewable energy in the context of the world forecasts. While there are a number of postings that contend that renewables will be a dominate player, logic says that will not be true. One recent posting declares that within ten years the world could be supplied exclusively by renewable. I would take that bet on the other side.

First some background from the ExxonMobil Report.

The world population will grow from 7.2 billion in 2014 to 9 billion in 2040. India will replace China as the world’s most populated nation at 1.6 billion people. The globes energy demand will increase by 25% from 2014 to 2040. The report believes without their forecasted improvements in energy use, demand would be double their 2040 forecast shown in the report’s 2040 forecast.

The chart below is their forecast of world energy demand 2014 to 2040:  (click on charts to enlarge)

The dashed line is the demand without the efficiency improvement forecast in the Report.

Renewables produce electricity so the world energy chart shown above is not applicable. The following charts will use World electricity demand.

The following chart shows world electrical demand for 2014 and 2040 and breaks down the source of the electricity.

The report summarizes the source information for the chart.: 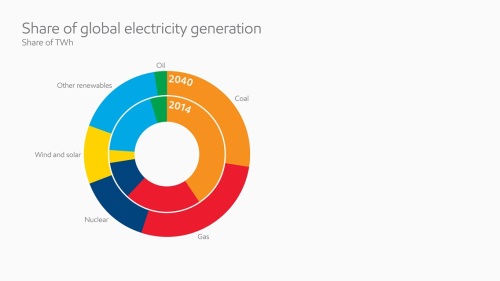 This next chart looks at the capacity increase from 2014 to 2040 for nuclear, wind and solar. The total capacity growth rate is impressive. However, the utilization of wind and solar are forecast to remain at about today’s utilization. Without energy storage, utilization of solar and wind will not improve. There are many people working on battery systems that would provide storage; none so far have proved economical.

The report summarizes the source information for the chart.: 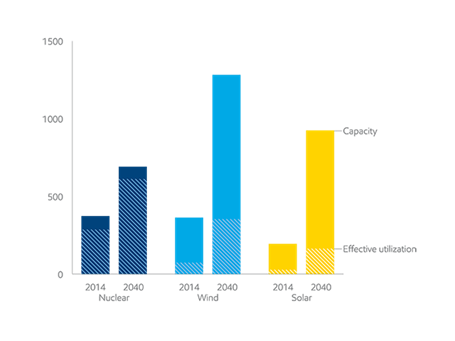 One or more posting will follow about the slow train wreck that is renewable energy.