The previous posting showed that the temperatures in the past have exceeded the current temperature rise giving lie to the assertion that the year 2015 was the hottest year ever.

To understand this chart, remember, time flow to the right from the past to the present. When examining the blue, temperature, and the red, CO2, the line to the right is later. For example, look at the blue and the red line beginning about 140,000 years ago. The red line is very close to the blue line but it is to the right of the blue line meaning that it is lagging the rise in temperature shown by the blue line.  The difference is more apparent if you click on the chart to enlarge it.   Note that the thickness of a line on this chart may be the equivalent of 1,000years. The creators of this chart meant to show the CO2 lagging the temperature because that is what their data told them. 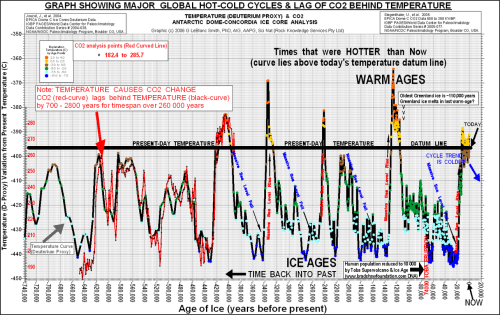 This a busy chart but it tells the same story as the previous chart that used Vostok ice cores. Again, click to enlarge it. Some interesting notations are included.

Where does the CO2 come from? The oceans hold vast amounts of CO2 dissolved in the sea water. Water can hold more dissolved CO2 when it is cold than it can when it is hot. As the water warms, CO2 come out of solution and enters the atmosphere.

How does this happen? CO2 solubility in water is determined by both partial pressure and temperature. If the sea water temperature is relatively constant and the amount of CO2 in the atmosphere increases, the partial pressure increase in the atmosphere would cause CO2 to be absorbed. But as cold sea water begins to heat, the solubility of CO2 in the sea water would decrease and CO2 would begin to leave the ocean water and enter the atmosphere.   What causes the sea water to heat up is still a question but I believe the Milankovitch cycles must result in longer Northern Hemisphere summers and a resumption of warming. This fits the data, too, where the temperature leads the CO2.

It would seem to be imparitive that the warmers try to destroy the CO2 lagging part of the ice core data.  They know that their theory that CO2 forces  temperature change fails based upon these ice core data.

A posting on Climate of the Past titled “Tightened constraints on the time-lag between Antarctic temperature and CO2 during the last deglaciation” says( that the deglaciation period from 19,000 to 11,000 before the present time)”… the CO2 lagged the temperature rise by less than 400 year and that even a short lead of CO2 over temperature cannot be excluded”

So their data says it was 400 years but forget about the data.   Lets just call it the way wish is was, “…..even a short lead…”

The ice core data repeatedly shows that temperatures were higher in the past than the present and that temperature rise or drop were followed by CO2, not lead by CO2.  And don’t miss this point—What made the CO2 go up before man had any influence?