Watts Up With That?

July 2015 Ocean Temperatures –
Conditions are currently warming up in the Pacific, and the NOAA Climate Prediction Center expects a greater than 90% chance that El Niño will continue through the winter and most likely into the spring. This image shows the July 13-19, 2015 sea surface temperature departure from the 1981-2010 average. In addition to the warmer than normal waters generated by the El Niño conditions, the Pacific Decadal Oscillation is also creating persistently higher than normal sea surface temperatures in the northeastern Pacific.

El Niño conditions are on the rise in the Pacific Ocean, this could potentially become a record event that might even beat the great 1997 El Niño as seen in the image above. We aren’t there yet, but the Climate Prediction Center has an advisory out that suggests we might be soon.

California could see an end to their drought situation, with the…

Did CO2 Cause North Korea’s Environment To Collapse?

Why is North Korea’s environment in a state of collapse? Well it is not due to weather weirding or what ever the new evasive title is. From the Public Broadcasting System (PBS) “Nova” program titled “Inside North Korea’s Environmental Collapse” we learn this:

“North Korea has been hiding something. Something beyond its prison camps, its nuclear facilities, its pervasive poverty, its aching famine, its lack of energy—electrical, fossil, or otherwise. What the hermit kingdom has been covering up is perhaps more fundamental than all of those: an environmental collapse so severe it could destabilize the entire country. Or at least, it was hiding it.”

What initiated the collapse? Nova had this to say:

“North Korea’s isolation means detailed data on environmental conditions are hard to come by. However, a 2004 study by the Korea Environment Institute based in Seoul, South Korea, reports that forest cover in North Korea dropped by 17 percent from the 1970s to the late 1990s. Following the collapse of the Soviet Union, which provided oil to its communist ally at a discounted “friendship price,” oil imports dropped by 60 percent. Unsurprisingly, the use of firewood for heating more than doubled. 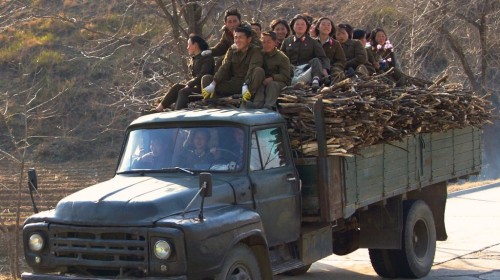 (North Korean soldiers hauling firewood back to base. Fuel for heating is scarce, so many rely on what wood they can find, including, apparently, the normally well-supplied Korean People’s Army.)

“What resulted was an increasingly barren landscape. Even saplings are felled for fuel, stripping forests of their ability to regenerate. “They don’t have trees to hold the soil,” says Jinsuk Byun of Sookmyung Women’s University in Seoul. Byun was not a part of the recent delegation but has closely followed environmental conditions in the country. “When it rains the soil washes into the river, landslides occur and rivers flood. It triggers a really serious disaster.” 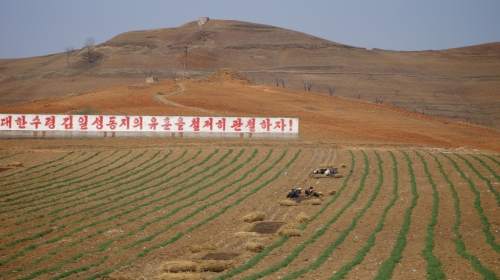 (Farmers preparing a field for the planting season outside Wonsan, North Korea, in the shadow of a denuded hillside.)

And this satellite photo from drroyspencer.com posting, “Is North Korea Cutting Down All Its Trees? 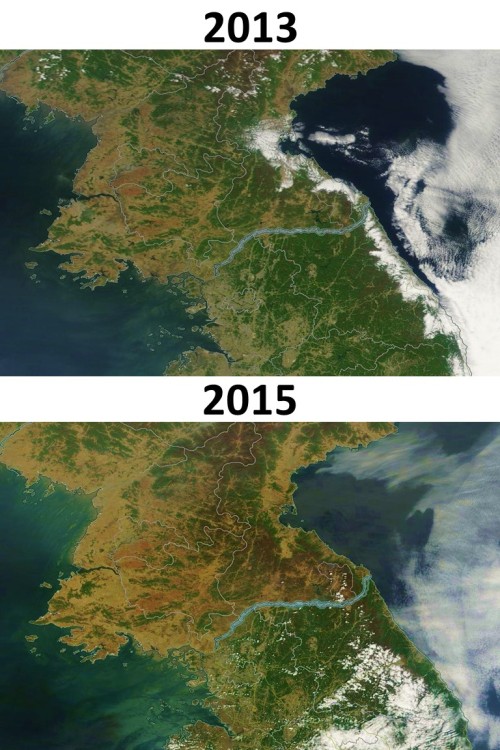 The Nova program cites loss of wildlife as follows:

” The lack of birds and other small animals noted by the scientists on their recent visit are a direct result of the famine in the 1990s, Demick says. “The frogs disappeared because everyone caught the frogs,” Demick says. “You see many fewer birds and small animals in North Korea than other countries. People living near the sea ate seaweed but that also ran out.”

Energy to heat homes. Energy to provide light . Energy to power the equipment to farm and do other forms of manufacturing.   The supply of fossil fuels is not sufficient to support the North Korean population.  This is a lesson for those who believe the world can manage without the use of fossil fuels.  Someday, perhaps it will, but alternative forms of energy–wind farm, solar cells and biofuels  are not ready for prime time, so be careful for what you wish.

In this case the North Korea leaders, present and past, are just plain crazy—- imposing a dictatorship that controls all aspects of the lives of the people. As the North Koreans are the same people as their cousins in South Korea, one would expect if the government quit regulating every aspect of their lives, they might be able to restore North Korea. Open up the country and spend the countries money on fossil fuels (energy) and stop spending it on nukes.

Tom Steyer Will Give Money To Any Politicians Promising To Push For A 50% Clean-Energy Economy by 2030.

Tom Steyer, the billionaire climate-change activist, wants to push the U.S, into a

50/50 split of “clean energy with fossil fuel energy by 2030 and 100% by 2050. To accomplish his objective he promises to give money to any politician that promises to act on Steyer’s behalf.

This is not his first dip into the pool of buying politicians. He spent $73 million trying to get Democrat candidates elected in last year’s mid-term election.   His investment was almost a total loss. He was the biggest funder that year. The following data comes from a table used in the Sunlight Foundation’s posting “The Political One Percent of the One Percent: Megadonors fuel rising cost of elections in 2014”. Copying a saying that Glen Beck used to use, WARNING, warmers should wrap their heads with duct tape before they look at the list.

Charles Koch (I probably need to say THE EVIL CHARLES KOCH or they will not recognize the name) came in 9th, way below Steyer who dominated everyone with $73million. He was not even followed closely by No. 2, Michael Bloomberg, also a contributor to Democrats.

The concept of clean energy reaching half share or complete dominance is delusional in that time frame.

In the realm of vastly wealthy men, Bill Gates tops them all. From a June 25, 2015, posting by the Washington Times “Multibillionaire Bill Gates rejects calls to divest from fossil fuels” here is what Gates has to say about this:

“I don’t see a direct path between divesting and solving climate change,” Mr. Gates said, as reported in the Financial Times. “I think it’s wonderful that students care and now the Pope cares. But that energy of caring, I think you need to direct it towards something that solves the problem.”

But Mr. Gates told the Financial Times that the focus should be on increasing research and development in renewables, saying that the current technology could only reduce carbon dioxide emissions at a “beyond astronomical” cost.

“There’s no battery technology that’s even close to allowing us to take all of our energy from renewables and be able to use battery storage in order to deal not only with the 24-hour cycle but also with long periods of time where it’s cloudy and you don’t have sun or you don’t have wind,” Mr. Gates said.

“Power is about reliability. We need to get something that works reliably,” he said.

Gates is a man who has made his fortune dealing with electronics and science.

Steyer’s backgound is as a coal hedge funds manager. Is he is trying to atone for his “sin” of making billions from coal?

“We found magnetic wave components appearing in pairs; originating in two different layers in the Sun’s interior. They both have a frequency of approximately 11 years, although this frequency is slightly different [for both] and they are offset in time,” says Zharkova. The two magnetic waves either reinforce one another to produce high activity or cancel out to create lull periods.

The model predicts that the magnetic wave pairs will become increasingly offset during Cycle 25, which peaks in 2022. Then during Cycle 26, which covers the decade from 2030-2040, the two waves will become exactly out of synch, cancelling one another out. This will cause a significant reduction in solar activity. “In cycle 26, the two waves exactly mirror each other, peaking at the same time but in opposite hemispheres of the Sun. We predict that this will lead to the properties of a ‘Maunder minimum’,” says Zharkova”

END_OF_DOCUMENT_TOKEN_TO_BE_REPLACED

Can We Trust The EPA? Part 5–Alaskan Copper Mine Veto And Coverup

The EPA has put a stop to the development of the Pebble Mine in Alaska. The mine seems to possess a very high value. The mineral rights belong to Northern Dynasty Minerals Ltd. They have posted the estimated resources as follows:

END_OF_DOCUMENT_TOKEN_TO_BE_REPLACED

Can We Trust The EPA?  Part 4– The Sue And Settle Scam

Have you heard of the Sue and Settle scam often used by the EPA? Generally the idea is for the EPA to ask some non-government , big green organization to sue

them regarding some piece of  legislation. The suit is settled by a consent decree where the EPA and the big environmental group achieved their shared goals. The court sets a deadline for comments from other interested parties that is so brief that no one can make meaningful comments in time to prevent legislation from becoming law.

END_OF_DOCUMENT_TOKEN_TO_BE_REPLACED

Can We Trust The EPA? Part 3—Secret Science

power plants to reduce mercury (hg) and Air Toxics. The regulation is based on questionable/maybe fraudulent science because the full data used will not be provided to other scientists so they may verify the findings.

“EPA also has a record of relying on science conducted outside the Agency that is not available to the public—or to the EPA—and therefore cannot be replicated or verified by independent research- ers. For example, virtually all Clean Air Act regulations under the Obama Administration have been justified by data sets collected by two non-governmental institutions over 30 years ago, which have been withheld from the public and cannot be replicated. In 2014, Congress learned this data either no longer exists, is of such poor quality that modeling results cannot be replicated, or has not been coded to facilitate independent analysis. However, EPA continues to rely on this data to support major regulations. “