Jay Leno says that putting ethanol in gasoline results in fires in older model automobiles.   As many of you know, Leno is a collector of classic 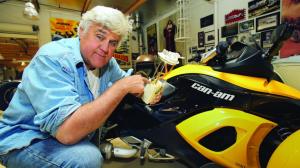 cars, most of which are old cars. In a posting in Autoweek, March 4,2015 titled “Jay Leno hates ethanol” he says:

“There have been a lot of old-car fires lately. I went through the ’70s, the ’80s and most of the ’90s without ever having read much about car fires. Suddenly, they are happening all over the place. Here’s one reason: The ethanol in modern gasoline—about 10 percent in many states—is so corrosive, it eats through either the fuel-pump diaphragm, old rubber fuel lines or a pot metal part, then leaks out on a hot engine … and ka-bloooooie!!!”

Once in my business career, I was the manager of our methanol-in-gasoline program. The company spent in the high six figures on laboratory work to determine the safety of methanol (not to be confused with ethanol) as a gasoline additive.  The program tested fuel lines, gaskets, fuel tanks, etc. Basically everything that this blend would encounter. The concentration of the methanol in the mix was an important factor. The work was completed and we got EPA approval to use. We knew that some of the older vehicles  owners might need to be alerted about the properties of the mix. At that time there was no Renewable Fuels Standard so people were not going to be forced to use the blend. Not too long after getting the EPA approval, the company decided to go out of the methanol business. End of story.

Jay has several more complaints about ethanol blended in gasoline at 10%:

“There’s more. I find that gasoline, which used to last about a year and a half or two years, is pretty much done after a month or so these days. If I run a car from the teens or ’20s and fill it up with modern fuel, then it sits for more than two months, I often can’t get it to start.     Ethanol will absorb water from ambient air. In a modern vehicle, with a sealed fuel system, ethanol fuel has a harder time picking up water from the air. But in a vintage car, the water content of fuel can rise, causing corrosion and inhibiting combustion.

Leno believes the Renewable Fuel Standard has done more harm than just that of damaging his and other people’s cars.   He says:

“Blame the Renewable Fuel Standard. This government-mandated rule requires certain amounts of ethanol and other biofuels be blended with gasoline and diesel fuel. “I just don’t see the need for ethanol. I understand the theory—these giant agri-business companies can process corn, add the resulting blend to gasoline and we’ll be using and importing less gasoline***. But they say this diversion of the corn supply is negatively affecting food prices, and the ethanol-spiked gas we’re forced to buy is really awful.

The big growers of corn have sold us a bill of goods. Some people are making a lot of money because of ethanol. But as they divert production from food to fuel, food prices inevitably will rise. Now, if you don’t mind paying $10 for a tortilla…”

“It’s time for us as automobile enthusiasts to dig in our heels and start writing to our congressmen and senators about the Renewable Fuel Standard, or we’ll be forced to use even more ethanol. Most people assume, “Oh, that’ll never happen. They’ll never do that.” Remember prohibition? In 1920, all the saloons were closed. It took until 1933 before legal liquor came back.”

At most marinas, gasoline containing no ethanol is supplied as small craft engines can be destroyed by the ethanol-gasoline mix. So boaters might want to join Leno and the automobile enthusiasts.

Leno has more to say about this issue and you can read it by clicking here on this website:

***Actually I believe he means “importing less crude oil” rather than “gasoline” but it doesn’t alter his point of view. These days we have plenty of domestic crude oil so we don’t really need the ethanol to stretch our gasoline supplies.

One response to “Jay Leno Wants To Ban Ethanol In Gasoline”