Obama Shutting Down Coal Based Power Plant Based Upon Computer Model Predictions.

Climate models have not demonstrated skill at making climate predictions. Yet, the proponents of man-made global warming cite the model outputs when telling us what the global temperature will be in 2100!!!!

From the Patriot Post, Joe Bastardi’s July 16 2013 posting “Evidence That Demands a Verdict:

‘This is almost laughable. Anyone who works in the field every day – as we do in the private sector – knows how bad models can be.”

“But the point is that the models are a mathematical representation of a chaotic field and I can not even fathom that this could be one of their reasons. It shows the ignorance as to the nature of the climate. It also shows the willingness of those that truly don’t understand weather and climate to place trust in a model. It’s flabbergasting.

One picture destroys the whole premise. Dr. John Christy, who testified before congress on this matter, has put this graph together:”

The chart shows how far off the climate models are from the actual global temperature measurements (Real World).

“The following graph from Dr. Roy Spencer is even more dramatic. While Dr. Christy shows the average, Dr. Spencer shows how the individual predictions of 19 US models are all well above actual observations. And the EPA is trying to base policy on this?” 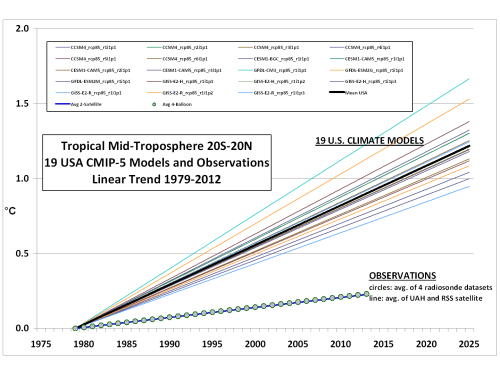 This shotgun approach (19 models) points out that the alarmists modelers don’t have a clue. In MHO, if the climate model program was worth anything, you would only need one.

“Why anyone would think they could justify EPA’s regulatory plans or suggest a carbon tax as an alternative given the facts presented above is beyond me.

The facts clearly reveal that the EPA and the president do not have a leg to stand on as their policies assault the very energy lifeline of our economy at this critical time in our nation’s history. The EPA’s decisions are based on erroneous ideas.”

The politicians that want to manage our use of fossil fuels are ignoring the facts.   Why wont they look at actual data instead of relying on models that have no skill? Politics, of course, but what are the underlying motives?

The next posting will discuss the cost/benefit for the Obama plan to put coal out of business.