The Alarmists Are The Real Deniers

The new normal according to the Alarmist warmers is that “cooling is warming.”  Every possible weather event, if it is unpleasant, is due to global warming. As the readers  of this post are very intelligent,  they remember that until the last 15 + years, the Alarmists have told us that global warming would mean hotter summers and winters.  That is what the alarmist’s climate models predicted but those predictions are being shown to be terribly wrong.  So what’s an alarmist to do?  They are hoping that you don’t notice that they are changing their mantra without ever acknowledging that they were wrong.
But what are the facts?   The “Updated on 23 April 2013” chart, below, shows that in the past two weeks, the US has experienced 4163 record low temperatures for this time of year.  We believe that this is weather and it is always changing.  But to the desperate Alarmists, it is the result of global warming. 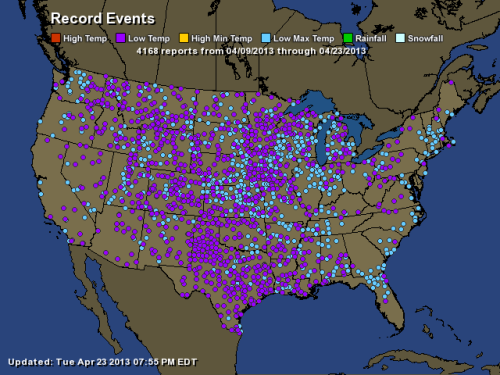 Chart by Ham Weather.com (click on chart to enlarge.)
A posting by David Deming  in the Washington Times, titled “The real deniers of climate change”  characterizes the data verses the alarmists contention.  He says:
“The Northern Hemisphere is experiencing unusually cold weather. Snow cover last December was the greatest since satellite monitoring began in 1966. The United Kingdom had the coldest March weather in 50 years, and there were more than a thousand record low temperatures in the United States. The Irish meteorological office reported that March “temperatures were the lowest on record nearly everywhere.” Spring snowfall in Europe was also high. In Moscow, the snow depth was the highest in 134 years of observation. In Kiev, authorities had to bring in military vehicles to clear snow from the streets.
Cold-weather extremes are a natural climatic variation, and this is exactly the point. If the world were experiencing a climate crisis owing to global warming, there shouldn’t be a single record low temperature anywhere in the world. The Associated Press has assured us, though, that this cold spell is not only consistent with a warming globe, it is actually caused by global warming. The proffered explanation is that cold weather in Europe is a result of melting sea ice in the Arctic. If this special pleading strikes you as unusually tendentious, it is all in the best tradition of explaining away ex post facto any weather event that appears to contradict the ruling paradigm.”
Deming cites numerous examples of the how wrong the Alarmists have been over the years.  The full posting is worth the reading to see what he has to say.
He concludes with this:
“With each passing year, it is becoming increasingly clear that global warming is not a scientific theory subject to empirical falsification, but a political ideology that has to be fiercely defended against any challenge. It is ironic that skeptics are called “deniers” when every fact that would tend to falsify global warming is immediately explained away by an industry of denial.”
cbdakota