As Cycle 24 has not yet achieved a Solar Maximum, it may seem a little early to begin forecasting Cycle 25.  But several forecasts have been made.  A recent posting in WattsUpWithThat notes such forecasts by Penn and Livingston and by David Hathaway.

You remember from previous postings on this site, that Penn and Livingston have been measuring Sunspot magnetic field strength and the temperature and luminosity of the umbra.   They began this study in 1990 and as of 2010 they have analyzed some 17,000 spots. Plotted on the chart below are data from their paper LONG-TERM EVOLUTION OF SUNSPOT MAGNETIC FIELDS through 2010 and additional readings since: 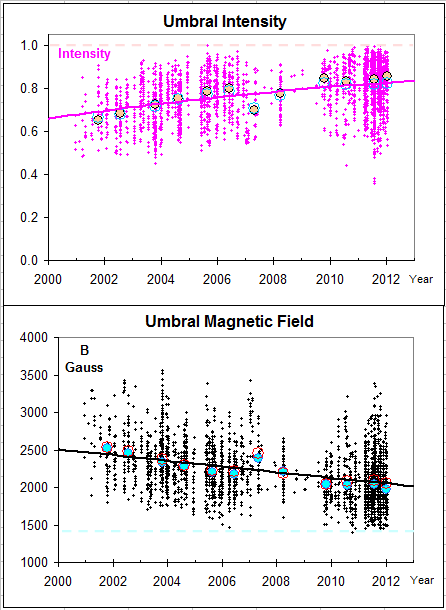 Using a linear decrease of 65 Gauss per year and a cycle duration of 11 years, they computed the magnetic probability distribution function for Cycles 24 and 25. Using this, a sunspot number is forecast. Cycles 24 and 25 are shown along with actual data from Cycle 23 in the chart below from their paper: 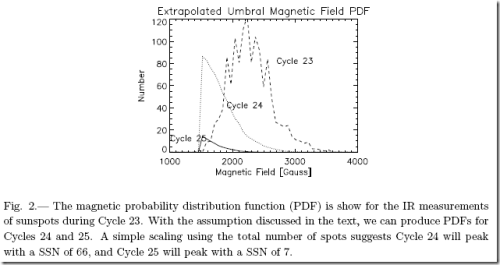 Chart provided by David Archibald, from the paper by Livingston and Penn.

The contrast of Cycle 24 and specifically Cycle 25 from the completed Cycle 23 is quite dramatic.  The Cycle 24 forecast, so far, seems to be reasonably in tune with actual data.  At a Cycle 25 sunspot number of 7, David Archibald says it would be the lowest sunspot number for a Cycle in 300 years!!!!

Livingston and Penn say that if the linear decrease were 50 Gauss per year rather than 65, the Cycle 25 sunspot number would be 20 which is still a very low number.

Livingston and Penn caution that it is always risky to extrapolate linear trends.

Next posting on this topic will be an examination of David Hathaway’s 2006 forecast of both Cycle 24 and Cycle 25.  It will also discuss one of the underlying theories for the decrease in sunspots.

What is the source of geothermal energy? According to Terrestial Energy, written by William Tucker, if you drill a 1000 feet (305 meters) deep hole, the temperature at the bottom of the hole is 16F (10C) higher than at the top.  Tucker says that the average temperature of the ground is 54F (11C) so the bottom of that hole would be 70F.

The Homestake Gold mine in Lead SD, discovered in 1876, produced 40 million ounces of gold and 9 million ounces of silver. At the time of its closure in 2002, the mine was more than 8000 feet below the surface   Based on Tucker’s formula, the temperature at the 8000 foot level would be around 180F unless cooling air was introduced. .  At one time, one of my relatives (by marriage) was the engineer responsible for keeping the temperature in the mine at a level that would allow people to work.  And his description of what was needed to do that was pretty impressive.

Tucker goes on to say: “At 80 miles down we hit the Mohorovicic Discontinuity, discovered by Yugoslav seismologist Andrija Mohorovicic in 1909. At this point the temperature reaches 900o C and rock turns to liquid “magma.” At 1500 miles deep the temperature rises to 3700o C and another discontinuity – the Gutenberg – marks the place where molten rock becomes pure iron and nickel. Below that tremendous pressures turn the iron core solid once again and temperatures reaching 7,000o C – hotter than the surface of the sun.”

He explains that the source of this heat energy as follows: “Some of it is due to gravitational forces. As the earth is pulled inward, some of this force is translated into heat. Another portion is residual heat from the earth’s formation. According to the commonly accepted theory, originally proposed by Immanuel Kant, the solar system precipitated out of a huge swirling dust cloud, where particles kept colliding with each other until they agglomerated into the sun and the planets.

In the later stages, this involved huge collisions among very large objects. These impacts generate large amounts of heat, some of which still remains in the earth’s core. Together gravitational forces and residual heat probably account for about 40 percent of the earth’s temperature – the exact figure has still not been determined.

The other half of the earth’s heat, however, comes from a remarkable diminutive source – the slow breakdown of two of the 90 elements, uranium and thorium. With 92 protons, uranium is the largest natural atom, while thorium (90) is the third largest. Because of their size, they are unstable, meaning they are “radioactive.”

The internal “binding energy” that overrides the mutual repulsion among positively charged protons is occasionally overcome itself. This releases large quantities of energy, which sets subatomic particles in motion, creating large amounts of heat. Incredibly, the slow breakdown of these two radioactive elements, uranium and thorium, is enough to raise the earth’s internal temperature beyond the level of the surface of the sun.”

Tucker draws some conclusions from this when he says: “Why don’t we just take the source of that heat – the uranium or thorium – bring it to the surface, and reproduce or even accelerate the process that produces this heat in a controlled environment?

This is what we do in a “nuclear reactor.”  “A nuclear reactor is nothing more than terrestrial energy brought to the surface. There is nothing sinful or diabolical about it. We are not defying the laws of nature. Rather, we are working with a process that already takes place in nature.”

So “global warming” is not killing the honeybees.  So much for another panic announcement by the Alarmists.   It seems that there are a number of reasons for high levels of bee deaths (Colony Collapse Disorder) and the latest find is a little fly that bores into the bee.  It causes the worker bee to leave the hive and then die.  On average, 7 days later larva emerges from the dead bee.  The study

“A New Threat to Honey Bees, the Parasitic Phorid Fly Apocephalus borealis” has been posted on the Plosone.org website and the abstract can be read by clicking here.  Two photos from the study are shown below:

Parasitic Fly on Bee –above

Studies of Colony Collapse find that parasites and fungal diseases as well as pesticides are also partially responsible for the bee deaths.

It is well known in the scientific community that if you say the problem is caused by global warming, there are monies available from our government and environmental advocate associations for the researcher to continue studying this “alarming” discovery.   But this could result in destruction of the researcher reputation when real scientist determine the actual cause.  Think Michael Mann.

My dear wife and I have travelled many miles by car. She is content having me do the driving.  However, I am, in her mind, careless about going by any gasoline station without filling up the tank. That is a bit of hyperbole but running out of gasoline is high on her list of things to never do.  Imagine if you will, how she would feel if we owned a Nissan Leaf and used it to drive from Knoxville Tennessee to Antioch, Tennessee, a distance of 182miles (293km).  The Nashville Tennessean reported on such a trip taken by Stephen Smith, Executive Director of the Southern Alliance for Clean Energy, along with his wife and son.  The trip took place on a cool day, about 35F (2C), primarily on Interstate 40.  Fast (30minutes) electric vehicle chargers have been installed at the Cracker Barrel Restaurant chain and they planned to use them as needed.  The 182-mile trip took 6 hours to complete.  It included 4 stops for recharging.

Quoting from the newspaper story:

Only problem was, the Leaf’s charge dropped more rapidly than promised. In what has to be a public relations disaster for Nissan, Smith’s EV was unable to travel no farther than 55 miles on any leg of the trip – and for the most part, much less. The company, and its government backers, proclaimed [5] the Leaf was “built to go 100 miles on a charge” (large print), with a footnoted disclaimer (small print) that it travels shorter distances (like, 70 miles) if the air conditioning or the heater is used. Turns out even that was an exaggeration.   A trip that should take – according to map Web sites – less than three hours, ended up lasting six hours for the Smiths because of all the stops they had to make. The approximate intervals where they paused for recharging were as follows:

Lebanon to destination in Antioch, just south of Nashville: 22 miles

“It was a little nerve wracking,” Stephen Smith told the Nashville-based newspaper. “I’m finding the range is not 100 percent accurate.”

A further quote from the article:

The Smiths’ experience echoed that of a Consumer Reports reviewer [2] and Los Angeles columnist Rob Eshman [3], who called his Leaf his “2011 Nissan Solyndra.” Eshman, editor-in-chief of The Jewish Journal, experienced the same gauge inaccuracies and range anxiety that came from traversing hills and mountains and the use of his air conditioning in hot, smoggy L.A.

“My life now revolves around a near-constant calculation of how far I can drive before I’ll have to walk,” Eshman wrote. “The Nissan Leaf, I can report, is perfect if you don’t have enough anxiety in your life.”

Bonus geography question—- How many State of Tennessee towns are named ANTIOCH?    See below.

Makes you wonder how that ever happened.

Cycle 24 became a little less active in December.   The charts for Sunspot numbers, F10.7 solar flux and Ap progression are shown below.

Are Sunspots Going to Disappear by 2015?

To reacquaint you with this topic, lets do a little review.  Livingston and Penn have been measuring the umbral intensity of sunspots and the corresponding magnetic field that spawns them since 1990.  In 2006 they submitted a paper to the journal “Science” reporting on their efforts and suggested that if the trend of weaker sunspot magnetic fields continued at its current rate, they would be too weak to produce sunspots.  This paper was rejected in peer review. Undeterred, they have continued to study these phenomena and so far, they seem to be on to something.

The photo sh0ws the “spot” (the umbra) surrounded by the penumbra that is shaped by the magnetic lines of force.

Livingston and Penn have studied over 1700 spots and they see a trend in which the darkest parts of the sunspot umbra have become warmer (45K per year) and their magnetic field strengths have decreased (77 Gauss per year**), independently of the normal 11-year sunspot cycle.

The latest data is shown in the two charts, UMBRAL INTENSITY AND UMBRAL MAGNETIC FIELD. 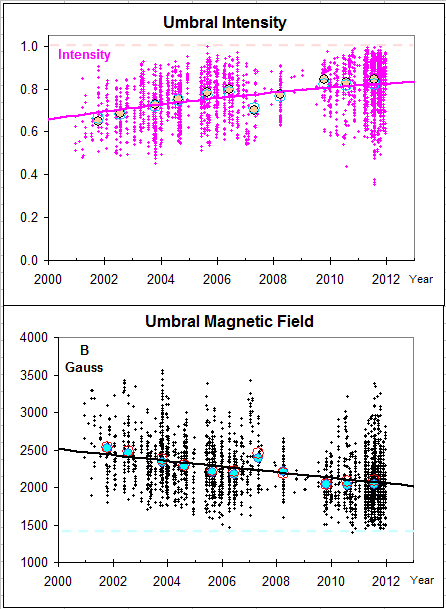 The umbral intensity is a measurement of the light from the umbra (the dark center) and compared to a measurement of the light from a calm sun surface.  Note that the umbra is getting hotter and brighter as the umbral magnetic field gets weaker.  The two scientists believe that if the magnetic field weakens to ≈1500 gauss, the sunspots will not form.   If the trend continues linearly,  that could happen in this decade.

If there are no visible sunspots in Cycle 25,  it could mean that we would be experiencing a solar minimum like the Maunder minimum that heralded in the Little Ice Age. It should be noted that while this is a suggestion, rather than a promise, it certainly is consistent with the observable trend of a less energetic Sun.

** Gauss is measure of the strength of a magnetic field.  Its units are Maxwells per square centimeter.  A small bar magnet will range from 40 to 100 gauss. The Sun’s average magnetic field strength is 1 and the Earth’s is 0.5.